A while back I did a post showing the law schools in the United States where U.S. Supreme Court Justices studied. Now that a new justice has been nominated, I thought it was a good time to revisit the topic. Amy Coney Barrett attended Rhodes College, a small religious college in Tennessee, and Notre Dame Law School. If confirmed, she’ll be the first justice who didn’t attend Harvard, Yale, or Columbia law school since Sandra Day O’Connor (Stanford Law School) who was appointed in 1981. I see that as a plus, although I would have preferred to see someone from a higher ranked school like Berkeley, Stanford, or the University of Chicago.

I decided to explore what opportunity a prospective lawyer would have for studying law in their state, or even in another state. Below is a graph showing the number of accredited law schools in each state on a per capita basis. A few are private, but none are unaccredited. Some are accredited only by their own state, but most are accredited by the American Bar Association (ABA). 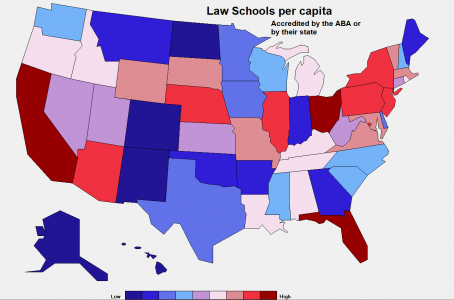 Florida has the most per capita, as indeed, it has many colleges and universities for its size no doubt due to capitalizing on its geographic appeal to college students. Alaska is the only state with none. I included the District of Columbia which, as seat of government, has quite a few, but I left out Puerto Rico.