One particular language mistake that I see occasionally and hear quite often on news shows is the uncertain antecedent. It’s a stylistic error, not a grammar one. Here’s an example:

Bob told Tom that his brother had called him and was drunk. He was very upset.

Whose brother is he referring to, Bob’s or Tom’s, and who is the “he” who was upset? It could be any of the three men referred to, although if it was the drunken brother, the “was” should have been “had been” to stay grammatical. This confuses the reader or listener. It can be clumsy or awkward to keep repeating names in order to avoid this problem, but a skillful writer can find ways to do it. One way is to use “he himself” or “his own.”

Sonya was the code name given by the GRU (Russian military intelligence) to Ursula Kuczynski, a German Jewess from a leftist/communist family. She was raised in Germany by well-educated and respected intellectuals in a rather privileged society. She thoroughly adopted Communist ideology and moved to China before WWII to help the Communists there resist the Nationalist (Kuomintang) government. There she was recruited by Richard Sorge, one of Russia’s most celebrated spies. She later served in Manchuria, Switzerland, and England, and underwent training in Russia as well. She turned out to have been one of Russia’s best spies throughout the Cold War. I don’t want to spoil it by giving more detail.

I’m no fan of history, especially political history, and I expected this to be a burdensome read for my book club, but I was very pleasantly surprised. It’s not weighed down with excessive biographic detail or wartime battle history. It’s a cracking good read and full of action throughout. People who enjoy spy tradecraft will love it. It’s astounding how she could have been (and was) overlooked and dismissed as a spy by Nazis and Swiss and English counterintelligence time and again. She also had quite a sexual history. She must have had quite a body from the various descriptions made of her. The author knows how to write, not just research, a story.

I recently sent a cryptarithm to The Cryptogram, the magazine for the American Cryptogram Association (ACA), but it was rejected as too hard. It is difficult to solve, especially for paper-and-pencil solvers, but it is solvable through anagramming and persistence. It makes an interesting exercise for computer programmers to write a solver. If you want to try it here it is:

In case you’re not familiar with the format for such problems, the * means multiply and the phrase in parentheses means that when correctly solved, the letters (i.e. their numerical equivalents) put in the order 1234567890 spell out three words. Each letter represents one digit and initial zeros are not allowed, so you know that the B, I, and E are not 0, and you know that also for the Y because the final digit of the product (S in this case) would also be Y.

Is there a way to tell the advertising world that I already bought a car? I’ve been getting scads of car ads on Facebook and everywhere else that isn’t blocked by AdBlock Plus. I’ll post another picture of it. Read your D**n cookies FB, Amazon, Google, and Bing! Go back to feeding me laxative and ED ads! 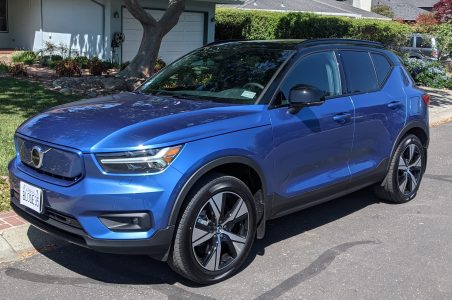 My garage was wired for a Blink EVSE back in 2011 for my new Nissan Leaf. The Blink was on the right side which was fine for the Leaf and much easier to install because of the workbench and washer/dryer on the left. Now with the 240V socket on the wrong side for Volvo, I have to back in to charge. Technically I can do it when facing forward if I pull in way on the right side, but only at risk of scratching up the paint on the roof of the car dragging the heavy cable over the top. The problem is that it’s a tight fit – the car in the garage, that is. If I pull in too far, I cut off access from the house to the wash/dryer workbench area where I get out of the car and if not far enough the garage door will come down on the car. Also, there’s lots of stuff on both sides that causes the warning system to sound alarms at me as I back in, and visibility isn’t good coming from the bright sun to the dark garage, especially with sunglasses on. My solution was to paint stripes on the floor of the garage so that the camera system recognizes the stripes and stops screaming at me as I back in. I’ve tested it pulling in forward and the bird’s-eye view camera system sees it perfectly and I can place the car perfectly. I haven’t tried it backing in yet, but if nothing else, it will make it easier for me to judge my positioning. I don’t expect others will need to do it, but I’m rather proud I thought of it. My butt is still sore from all the squatting. I used masking tape, spray paint, and a sort of stencil made from a cardboard box. 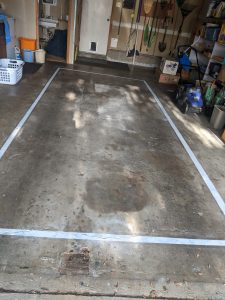 I don’t normally do product reviews in this blog, but I thought I’d give a shout out to Poweramp. In my earlier posts I complained about my new Volvo not having an easy way to play my mp3 music. I have hundreds of songs I’ve either recorded myself, ripped from my CDs or LPs, or downloaded as mp3s. In my previous car, a Nissan Leaf, I had these in three folders on a USB thumb drive. I just plugged them in to the USB port and the car’s player would play them in order (or I could have them randomized). I discovered that I can’t do that with the Volvo.

My son came up with the solution: Poweramp, an inexpensive app available from the Google Play Store. I don’t know whether it plays wma files, the default format for Windows and the format I had used for most of my music. That’s because I first converted all my wma files to mp3 before loading them onto my Android phone. Before I downloaded Poweramp, I could go to the Files app and tap a music file from the list of files, and it would play, but I could not organize them into playlists, and every time I turned off the phone or quit the Files app, it would open up back at the beginning again.

With Poweramp I was able to create three playlists, equivalent to the folders I have on my thumb drive, and when I stop the app from playing, it remembers where it was and continues from there the next time. It has quite a few other nifty features that I haven’t explored, but I have to say it’s well worth the price just for the convenience. The phone plays through Bluetooth, which has its own drawbacks, but the sound quality is good enough for my ears.