Brace for Impact is now available on Amazon both as an ebook and a paperback.  Download it now. Just click on the image. 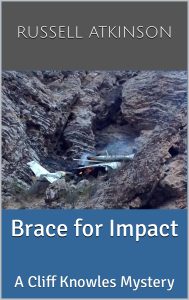 A big thank you to all my fans for supporting my writing.

Cliff Knowles fans, you’ve been waiting a long time for a new Cliff Knowles Mystery. It’s on its way. I’ll let you know when it’s available. Here’s the cover as a tease. I’ll be sending out a notice to my mailing list.

I just updated my music playlists. You know how great it feels to discover a new performer and acquire a bunch of new music? Well, I came across Ethan Leinwand and watched his excellent long video The History of Barrelhouse Blues Piano. I had to have this music, so I found his website and bought two CDs. That inspired me to update the playlists on my phone, so I ripped the CDs, bought some other songs I’d been meaning to add, and went back through my old songs that I’d removed from the playlists because I’d gotten tired of them. I found several I wanted to reinstate. So with this new batch of songs, I deleted some of the old stuff from the playlists (but not from my phone or computer) and added the new stuff.

Now the removals (although they may come back when I’m no longer tired of them).

The entire list consists of 438 unique songs at the moment, although I spread them over three playlists and some of the songs are on more than one playlist. The total number of songs I play from beginning to end, including repeats, is 520. If you want to see that for comparison, I posted the previous list earlier, click here.

Magpie by Elizabeth Day
My rating: 4 of 5 stars

A young couple living the life in London takes in another woman out of necessity. Will the man’s fidelity be tested? After reading several chapters into the book, I was fully prepared to dismiss it as typical chick lit about a man taking advantage of his female partner, with the woman eventually screwing up her courage and dumping the cad, teaching him a lesson in the process. It had all the female author markings, like constant descriptions of what the women were wearing. I had to look up numerous fashion terms. I now know what a Breton top is (a white sweater with thin, black, horizontal stripes) and boyfriend-style jeans (baggy, oversized, worn looking ones). A male author would have just written, “she wore a striped sweater and baggy jeans.”

But along comes Part 2 and the first big plot twist gave me a jolt. Wow! This is not what it seemed. I realized it could turn dark quickly, and it did. I’m always a bit skeptical of the unreliable narrator trick since it’s so overdone, but this had an original edge to it. You never know whom to trust, all the way to the very end. The suspense builds deliciously. It’s a clever plot and the writing is quite good, too. If you get a little bored at the beginning, stick with it. I’m glad I did. I’d give it 4 1/2 stars if they allowed it in Goodreads.

The Haunted Lady by Mary Roberts Rinehart
My rating: 4 of 5 stars

Rinehart truly deserves her epithet as the American Agatha Christie. This story is a classic locked-room mystery. An old woman is found dead in her room that is tightly sealed and guarded by a nurse outside the door. It’s a traditional Victorian style house with many rooms, family members, servants, and regular visitors who may or may not have motives. Nurse Hilda Adams is the protagonist cum detective. The writing is sharp, old-fashioned, and refreshingly free of swearing and gore. The plot is convoluted and far-fetched. I doubt anyone figured it all out until the final reveal but I managed to guess one small piece in advance. It may be too tame and complex for some, but I enjoyed it.

The author does have one original stylistic trait that I found interesting: overt foreshadowing. For example, Hilda would meet someone and the author would write something like “She would later describe the person to the inspector as looking ill and upset,” thus suggesting that this physical state is important to the mystery. Or maybe you’re supposed to wonder if Hilda is mistaken or even intentionally describing the person inaccurately. She could have written that Hilda met the person and he looked ill and upset. Why write that she later told the inspector at that point? She could mention it later when Hilda actually talks to the inspector. The point is to alert the reader that this is a clue (or maybe a red herring!) She’d begin a chapter with “Mrs. Fairbanks was murdered on Saturday night.” At that point in the story, it was still Saturday morning and the author proceeds to write about everything that happened on Saturday, but you’re forewarned that you’d better pay attention to where everyone is at every point because you know the murder is about to happen. These are not spoilers because you are told very early on who is going to die. You lose the surprise element to an extent from the foreshadowing, but instead you get a sort of foreboding suspense which is at least as entertaining.

The Greatest Invention: A History of the World in Nine Mysterious Scripts by Silvia Ferrara
My rating: 1 of 5 stars

I am very much interested in the subject matter, or at least I thought I was. But the writing in this book was so atrocious I couldn’t finish it. Halfway through I gave up. The author is a chatterbox and fills the pages with digressions and blather. I expected a serious discussion of the various scripts mentioned in the title along with many illustrations and comparisons of the unique features of each. Instead we get the author’s opinions about almost everything backed up with nothing more than “It’s obvious that …” or “Everyone agrees that …” except it’s not obvious to me and I doubt everyone agrees.

The chatty informal tone is totally inappropriate and her meanderings make it hard to follow her points. She uses metaphors mercilessly and is constantly telling us what she is going to tell us instead of just telling it. Here’s an example from page 42 shortly after she’s told us a few paragraphs earlier that Linear B is of little interest since it’s been deciphered:

Earlier I mentioned Linear B – let’s talk about it, at least for a bit. The truth is Linear B isn’t of all that much interest to us, since it’s been deciphered. For now, we’ll spare it only a few measly lines. Though we’ll come back to it, I promise, since it’ll be of help when we look at the process of deciphering scripts. So then, Linear B.

Not only is it repeating what she’s just told us, but she takes an entire paragraph to tell us that she’s going to start writing about something. Just start writing about it, for Pete’s sake! You’ve already used up those “few measly lines.” This can’t be explained away by a bad translation.

She punctuates the text with pop culture references and compares rocks and clay tablets to iPhones and bedsheets. She’s also dismissive of all opinions that differ from her own. She typically says things like “this is generally referred to as X but really it is Y” without a convincing explanation as to why conventional terminology is wrong. She mentioned some Japanese term and said you could tell what it means just from the sound of it. No, I couldn’t, and I speak some Japanese. You get the idea. She’s a perfect example of Often Wrong But Never in Doubt.