The Lincoln Highway by Amor Towles
My rating: 2 of 5 stars

This book was highly rated or strongly recommended to me by three different people whose taste and judgment I trust. So it was a big disappointment that I didn’t like the book. I got about 40% of the way through it and gave up because I still hadn’t become interested in the story or characters. It’s too long a book to spend the necessary time to finish something I don’t like. I found none of the characters credible or relatable and none of the events believable either. I could point out more specifics I didn’t like, but I don’t take any joy in throwing a wet blanket on the joys of others, so if you liked it, good for you. Towles’s earlier book A Gentleman in Moscow was somewhat better, but I was lukewarm on that one, too, for many of the same reasons. There’s just something about the artificiality of Towles’s style I don’t like.

Project Hail Mary by Andy Weir
My rating: 4 of 5 stars

Weir has followed his first novel The Martian, with this very sciency thriller. The Earth is threatened by a microbe (astrophage) that is eating the sun. If it continues, in a few decades the Earth will be a frozen world and mankind will perish. Scientists obtain a sample through a probe and identify enough about it that they are able to determine that many other stars in the local cluster are infected, but one isn’t. Earth governments join together to build a mission to that solar system (Tau Ceti). It is up to the crew to determine how that other star has survived the astrophage infection and send back the solution.

{Mild spoiler, although you learn this very early in the book] Only one of the crew members survives to reach Tau Ceti. From this point on it resembles The Martian quite a bit as our hero uses his knowledge of science and engineering to overcome all sorts of problems, although he gets some help from an unexpected source. I’ll say no more on that. I did love the cleverness of much of the science workarounds and I learned quite a bit. It was also nice not to have the gore and violence of many other science fiction thrillers, the so-called space operas.

The book has its flaws, however. It is too long. It is much less plausible than The Martian. Weir gets lazy and just creates crises and then impossible and unexplained solutions. There are many inconsistencies. It’s also too silly. The lighthearted tone doesn’t fit well with the seriousness of the mission. The light tone reduces the suspense by a large factor. It’s as though Weir couldn’t make up his mind whether to write a sci-fi thriller or an travel adventure book. It becomes tedious after page 200 or so. Another crisis, another implausible solution. All in all, though, I enjoyed it and can recommend it.

Everyone has heard plenty about what’s happening in Ukraine. Russia invaded it and Ukrainian refugees are fleeing. This has been going on for weeks. They’ve mostly been fleeing to neighboring countries. This chart shows Google searches in the U.S. for the four countries that have taken in the most Ukrainian refugees.

The bump for Poland and Hungary back in May 2021 is probably due to interest in their blockage of Gender Equality language at the EU Social Summit. Whatever you think about that, all four of these countries are showing tremendous generosity to the Ukrainian refugees. If you need a geography refresher, here’s a map. 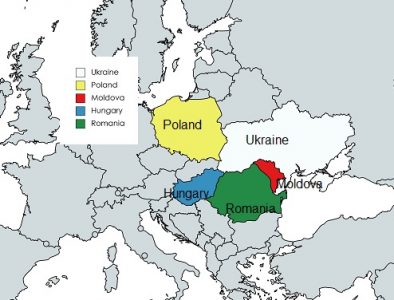 Poland has taken in more than any other country, at least for now. The others listed are next in sheer numbers. Eventually the refugees may settle in other countries. I’ve skipped Russia, which would also be on this list, but many of the “refugees” there were forced there and did not go there to seek refuge. They are more like hostages or POWs.

Lemon by Kwon Yeo-Sun
My rating: 1 of 5 stars

After reading the entire book I have no idea who did what. A beautiful girl died, years pass, and another crime occurs, but I don’t want to give a spoiler so I won’t say more on the plot. There were multiple suspects in both the crimes – pretty much the same people – but no one seems to have a motive and it’s never revealed who did either. I couldn’t even tell which character was narrating each chapter. Each was in the first person but there was no label or chapter heading to reveal who it was. In most of them it became obvious, but in several of the key ones, it wasn’t. The writing was also awkward and wandering into irrelevant anecdotes. I don’t know if it was bad writing or bad translating but this is definitely a book to skip. Its best (or least bad) feature is that it was very short.

With gas prices soaring, there’s a lot of outrage among the public. Everyone’s prone to blame someone, usually the “opposite” party’s policies. There’s no question that the Republican tax cuts and the Democrat spending plan have both contributed to the current inflation. But let’s just look at the cost of driving a car.

Stop blaming politicians and look in the mirror. If you’d purchased an electric vehicle (EV), you wouldn’t be having this problem. I drive a Volvo XC40 Recharge, an EV. My rough calculations put my energy cost per mile at around 7.5 cents. My wife’s car, an Acura gas car, costs over 20 cents a mile at today’s prices and that doesn’t include other costs the EV doesn’t have like oil changes and the $75 I just paid for a smog check. In California the electric grid uses very little fossil fuel so it’s not affected by the Russia oil ban. America’s policy is to eventually be almost all EV. Norway has done it. It’s time everyone got on board with it. The petroleum age is ending.

I now have enough puzzle solutions to make some meaningful observations about my Worbot program that solves the daily Wordle puzzle. First, here are my Wordle stats (left) and Worbot’s (right).

Obviously, I started tracking Worbot stats a month or so after I started working the puzzle myself, hence the different totals. The stats on the right also don’t show the first few attempts where I tested the program, including the one where it failed to solve PROXY.

As you can see, Worbot has a better record than I do. It has three times as many solves in three attempts than in five. My ratio is about 2 to 1. It plays in hard mode, too; I don’t. In case you don’t know what hard mode is, it means that you must use the letters that have been identified in prior guess each time you guess. Worbot also takes it further and cannot guess a word that uses a letter than has previously been shown NOT to appear in the target word, i.e. the gray letters become off limits. I think the key to its success is the word lists I have programmed it to use. The list it uses for its initial guess is limited to 64 words that: 1) have all or almost all high-frequency letters; and 2) have been verified to appear in the actual Wordle program target word list (2315 words). The program chooses randomly from those 64. It at least has a chance of getting the word on the first try, although it hasn’t succeeded at that yet. Neither have I.

The main list that Worbot uses for all subsequent guesses is my normal master 5-letter word list, but ordered by frequency in English. That master list (over 4,000 words) does NOT use any knowledge of the official Wordle list. So later guesses may be of words that have no chance of being the correct one. Nevertheless, the fact that it searches the list in order of frequency makes it highly likely it will find the most common word that fits all the previous clues from the colored squares. I believe this increases the chance that it will guess the right word in fewer guesses than me, since I make guesses based on instinct and general vocabulary with no knowledge of whether other words may be more common. That’s because I have made the assumption from the relatively low number of words in the official Wordle list that all of the target words are quite common.

By the way, I had fun programming the statistics page to look much like the Wordle one. That was actually the hardest part of the programming.