The Incomplete Book of Running by Peter Sagal
My rating: 3 of 5 stars

This very short, easy-to-read book has several amusing anecdotes and displays the author’s usual wit. So it’s entertaining enough to earn its three stars. But I felt cheated with this one. I was expecting a book primarily about running, although I knew that the author, the host of a radio show I like, would put a sardonic spin on it. Instead I found the author wrote an ego-driven combination of self-flagellation about his failure as a husband and father and a humblebrag about his running prowess and volunteer work, such as it is. If you’re a huge Peter Sagal fan and are interested in his quasi-memoir, then you’ll probably enjoy this.

The cover is a near clone of Jim Fixx’s iconic work including a photo of a man’s legs wearing running shorts and shoes, so I think it’s fair to assume the average reader, like me, is a runner and most interested in that. I have news for you, Peter; we’re not interested in your marital failure or how fast you run. Nor are we interested in how fat you were and certainly not in your toilet habits. The author is an obsessive runner, a habit (hobby?) that probably contributed to his troubles, and he does not set a good example for other runners to follow. I found his running advice almost entirely wrong. If you want to stay healthy and enjoy running into old age, you should avoid running on pavement as much as possible, rarely if ever enter races, avoid running clubs, and don’t run to the point of exhaustion unless truly necessary, e.g. qualifying for a job-related fitness test. Keeping track of your times, weight, and so on, is fine, and running with a buddy is fine, too, if you can find someone who runs exactly the same pace and distance you do. Otherwise avoid it. And, for Pete’s sake, take care of the “egress” problem he obsesses about before you run.

I haven’t posted about recent Google search trends lately, so I decided to check out what’s hot there. It seems that all the most frequent searches these days are National Football League (NFL) teams, I picked five teams that usually have a good national following, including the most recent Super Bowl teams, to see who’s garnering the most interest. This chart represents how these five fare nationally compared to each other. Obviously there’s some regionality. This map represents searches over the past year. I’m sure it changes week by week depending on who won or lost or who got injured or otherwise made the news. 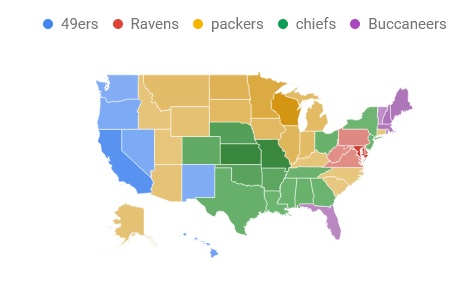 Guilt at the Garage by Simon Brett
My rating: 3 of 5 stars

This piece of fluff might easily have been imagined as an outline for a one-episode TV mystery. There’s not much to it. I’m learning more about what publishers do to make a book marketable, and it isn’t pretty. A couple of posts ago I mentioned a 500-page that was squeezed down to 350 pages by use of small font and narrow margins. This book, at a scant 185 pages, is stretched to feel larger by use of extra-thick paper and some pointless digressions in the story.

The heroines are two single ladies in a small English town who double as amateur sleuths. They look into the mysterious death of an elderly garage owner who dies from a gearbox falling on him in the service pit. It’s all quite implausible, but the book is populated with a collection of zany characters and village life in rural England is skewered good-naturedly. It’s a quick and inoffensive read.

Just Get Home by Bridget Foley
My rating: 2 of 5 stars

I liked the premise of the book, so I took a chance. It sounded sort of post-apocalyptic without the apocalypse (just a big earthquake) or the pseudo-science. It’s your basic disaster movie/earthquake thriller. I only got a third of the way through before giving up. The entire storyline was nothing but nastiness- child abuse, rape, looters, bullying, sadism. I can only give it two stars because it was readable if you can stand the content.

A Short History of Tractors in Ukrainian by Marina Lewycka
My rating: 4 of 5 stars

The author has presented us with a heartwarming, at times outrageous, and thoroughly entertaining story of a semi-functional family of Ukrainian refugees who settled in post-war England. When a 36-year-old gold digger from the Ukraine latches on to the widowed 84-year-old father of two feuding sisters, they form a united front to fight back. If this were a television show or movie, it would be called a dramedy. The father works on his seminal work about tractor history while lusting after the voluptuous bosom of his new love. The book sold a million copies and was nominated for the Man Booker Prize (British equivalent of a Pulitzer).

My last post showed those baby names that gained the most in popularity from 2017 to 2020. Today I show those that plummeted the farthest.

Girls’ names that lost the most in that period

I notice a few things of interest here. First, the boys’ names that dropped the most tended to be ones not in the most popular group to start with, at least compared to the girls’ names. In other words, boys’ names don’t follow trends quite as much. The popular ones stay popular longer. Another thing I noticed is that the biggest drops appear to be related to current events. I can’t help but feel the drop for Gavin is related to California Gavin Newsom (although there are some very popular YouTubers named Gavin). As for Alexa, I’m compelled to conclude that it’s related to the Amazon device of that name. It may be as simple as parents who have one not wanting the device to respond every time they call their daughter by name. One other oddity that caught my attention is how many of these girls’ names begin with A. If you look at the last post, not a single one of the big gainers started with A, yet four began with E. Curious.

A couple of years ago I posted about what baby names were trending upward or downward. At that time the most recent Social Security data was from 2017. Now the 2020 baby name data is out, so I thought I’d update that post. After all, trends tend to be very … trendy. If you just want to know what baby names are the most popular, there are plenty of sites online for that, include the Social Security site here. What I’m more interested in are the names that are rapidly gaining or falling in favor. So here goes.

Girls’ names that gained the most in that period

In my next post, I’ll show you the biggest losers.

A nice thing happened this morning. It was a very small thing, but sometimes that means a lot even so. We had two toters out at the curb for the garbage trucks to collect. One toter was for garbage, the other for recycling. The garbage one was picked up first. The truck that does the job has extension claws that reach out, grab the toter, lift it to dump the contents into the truck and put it back down. All that happened normally, except the toter was put down wrong and it ended up a long way out from the curb into the street.

Later, as I was passing by the front window, I noticed this and went out to retrieve it and put it back by the side of the house. As I got there, I saw the next truck coming by for the other toter. It was only one house away. I realized that the first toter was in the way of the truck and the driver would have had to drive around it awkwardly, or get out and move that toter to reach the second. So I hurried over and hauled that toter back beside the house. As I turned around to go back out for the second toter, I noticed the truck backing up with the empty recycling toter in its claws. The driver deposited it at the foot of my driveway instead of where it had been. This saved me about 50 feet of walking (25 extra each way). He had appreciated that I moved the first toter out of his way and was reciprocating by saving me a few steps. I waved and he drove on.

We Have Always Been Here by Lena Nguyen
My rating: 1 of 5 stars

I was trying to find a good sci-fi book, but ended up instead with this poorly-written overlong fantasy story. The best that can be said about it is that could possibly be a script for the worst ever episode of Star Trek. The author clearly has no knowledge of science and made no attempt to provide even remotely plausible physical events. The story could have been told using zombies or fairies instead of androids. It takes place in a spaceship on a mysterious uncharted planet, but that’s about as close to science fiction as it gets. The rest is junior high school level squabbles among the crew and a sort of half-assed mind melding. To top it off, the font was too small, with too little white space (i.e. little dialogue and narrow margins) and at 351 pages was obviously a 500-page book crammed down to fit commercially viable size. At least 400 of those pages could easily have been done away with. After the first 100 pages or so I skimmed very liberally, but I did finish it. Why, I don’t know.