In my last post I showed some maps of where Germans, Italians, Irish, Swedes, and Greeks are the most densely settled in the U.S. Now I want to show you a few more. First, the Scots. I would have thought they settled in the same places as the Irish, but those are distinct countries that came in different waves. The Scottish settled largely in Appalachia and the South, although the large contingent in Maine is consistent with the large Scots population just across the border in Eastern Canada. Nova Scotia actually means New Scotland. The coal mining industry may have been part of the explanation, too. I’ve read that Scottish and Welsh coal miners were recruited to mine the coal in Appalachia. 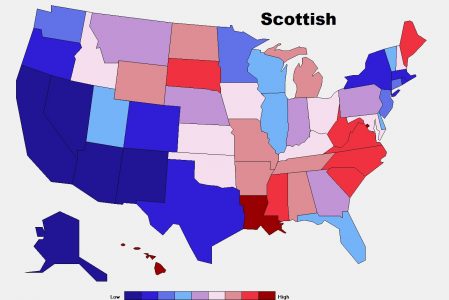 I’m a little surprised about Hawaii, but that’s what the data shows. Now, how about some smaller, more recent immigrant groups? Here’s the Vietnamese: 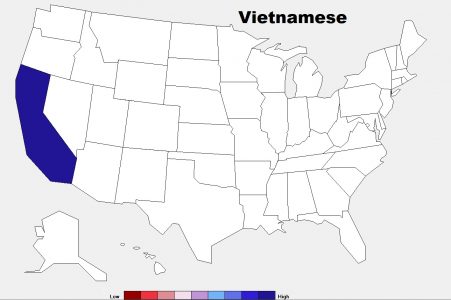 The white color indicates that the number of Vietnamese named people in the overall time period from 1910-2018 is too small to register in my tool. Only California had enough to register any at all. It’s not surprising that the number is small and that they, like any Pacific nation, would settle in California. I also ran the data for Armenian names and got the same result. California was the only state with enough to show. They are a European nation, of course, so the explanation may be something simpler: modern day refugees fleeing (the Armenian genocide took place during World War I)  and settling in one of  the newest, most quickly developing states. California also has warm weather and those two countries are warm weather lands. 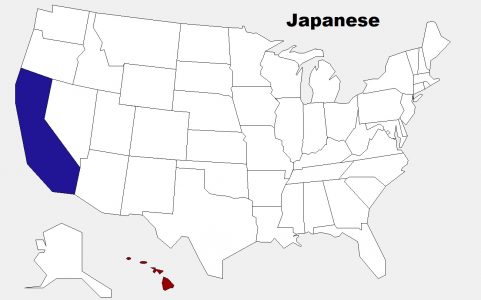 Last, but not least, are the Japanese. Once again the numbers are small, but they register in two states: Hawaii and California. I think the numbers would be bigger if I used another method of counting than names, because in my experience many Japanese-Americans named their children with traditional American names, especially since the 1930s when Japan was looking like an enemy.