This will be my last post on the subject of Wordle for a while (I hope). I wrote a program that tries to guess the input Wordle word. I’m calling it Worbot. I wrote it so that its attempts are shown in the same format as the actual Wordle. The program doesn’t have access to the Internet, so it can only solve the word that is input. It does a pretty good job of it. The only word Worbot hasn’t solved in six tries (the maximum allowed by actual Wordle) is PROXY, which is also the only word I didn’t get in six tries. And I had to run the word PROXY three times before the program failed. It rarely fails to solve within four guesses. Here are some sample runs. Spoiler warning: one of the words shown is today’s actual Wordle word, but you probably won’t read this today. 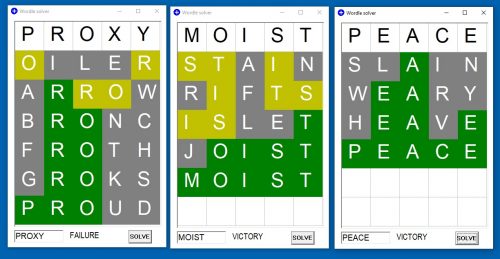 My purpose in writing this is to see if I can beat my program over time, i.e., develop a better record. I don’t yet have the routine written to track that for the program. My word list is slightly larger than the one used by Wordle, so some of my words may be invalid, but it could also be that Wordle uses some words not in my list. It may be possible to download the Wordle list, but I’m not concerned enough to go to that trouble.