I’ve always enjoyed reading the funny papers. Only now, they are read almost entirely online, not on paper, so I’ll call them comics. I mostly read ones that are intended to be funny and avoid the soapy ones like Mary Worth or the adventure type like Prince Valiant or political ones. I just like a good chuckle. All comics are hit and miss; it’s hard to come up with good material every day. So I decided to do a little analysis of some of the strips I follow to see if I could determine a common theme or technique that made some days funnier, or at least better liked, than others. The site I used for this is GoComics.com although I also read on other sites.

I chose four relatively popular strips that are humor oriented and recorded how many likes each got from readers over a three month period (July through September 2021). The four strips are Pickles, Frank and Ernest, The Argyle Sweater, and Brewster Rockit. Here’s a chart of the raw data: 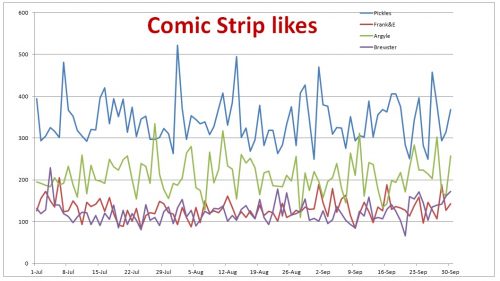 The peaks show the days which got the most likes and the valleys the fewest. I examined the five highest peaks and the five lowest for each strip here’s what I found:

Pickles: The most popular strip, Pickles, dating to 1990, features an older couple, Earl and Opal, and sometimes other characters. It’s mostly good-natured. One noticeable difference between the most- and least-liked strips was that both main characters appeared in all the most-liked, but Opal did not appear in any of the least-liked. The best-liked in general were more upbeat and less cynical. The least liked ones had Earl pranking his grandson by telling him false “facts.”

The Argyle Sweater: A relatively new strip, resembling The Far Side, has no regular characters, but often features anthropomorphic animals, furniture, etc. It has a sharper edge than the other three strips. The five most liked contained three with clever wordplay and two with no words at all. Only two had humans in them. They all had that delayed humor quality where you have to think about it (or take a second look) before you suddenly get the joke. My favorite was one where the guard at an art museum is telling Vincent Van Gogh he can’t come in unless he’s wearing a mask. At first that seems kind of funny that the famous artist can’t enter an art museum, but then you notice Van Gogh is wearing a mask but it’s dangling from just one ear since, of course, he’s cut off the other one. Three of the five had to do with art. The least popular ones tended to be grosser or more tasteless than most. Two had bad puns.

Frank and Ernest: Most of the strips feature the two named characters, two goody guys. Puns and other wordplay are common in this strip. Of the five most liked, most had good wordplay. Only one featured both characters and one featured neither of them. Of the least liked, some had Frank and/or Ernest, and some didn’t. The main difference was simply the strip had no good wordplay or punch line. For most I just didn’t “get it.”

Brewster Rockit: Brewster is the captain of a spaceship and, being an idiot, is the butt of many jokes. There are many peripheral characters. By far the most popular strip during this stretch was on the Fourth of July with a patriotic theme (the only one of these four who chose to reference the holiday). Four of the five most liked also had a pro-mask, pro-vaccination theme although one was subtle. A crewman objected to a mandate requiring him to wear “one” on his face and refused – then went out into space without a helmet. The mandate wasn’t to wear a mask. The strip isn’t political in general but it does have some educational and public service type strips, mostly about space science, which some may consider political. The low-scoring ones didn’t have anything in common I could tell. Two involved anthropomorphic insects, which I happen to think were clever strips. One was a cicada emerging and wanting to check his Blockbuster stock and the other a mayfly checking his retirement account a few hours after starting it. Perhaps some readers don’t know that cicadas hibernate for 17 years and mayflies live only a day.

After all the analysis, the best I can come up with is that the funniest strips generally got the most likes, patriotism plays well, and some readers develop a fondness for particular characters and are disappointed if they don’t appear. Ones that had that surprise factor – the delayed “oh, now I get it” – seemed to score best. Overall, the least liked ones were simply not as good as usual. I thought perhaps weekend days would score differently than weekdays, but that seemed to have had no effect. Older, longer-established strips got more likes than the newer ones.