In case you missed it, last Tuesday the far right wacko congresswoman from Georgia, Marjorie Taylor Greene, claimed that House Speaker Nancy Pelosi was sending gazpacho police to investigate the capitol riot. Apparently she doesn’t know the difference between cold soup and Nazis. This is surprising, since she is one of those. Apparently a lot of other people in this country also aren’t familiar with the meaning of gazpacho. Look at these two Google Trends charts. The top one is a comparison of how often and where the terms were searched on Google during the month of January. The searches were about the same frequency and randomly distributed. The bottom chart shows the searches this month. Nearly all of that blue searching has been in the last three days. 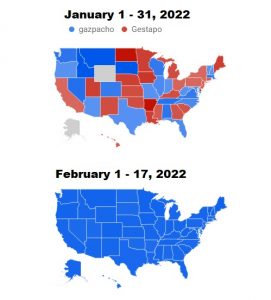 Greene is the same woman who claimed that Jewish space lasers were setting the forest fires in California last March.