The last two parents charged in the Varsity Blues college admissions scandal recently agreed to plead guilty, or so press reports say. Gregory and Amy Colburn of Palo Alto face prison time and are scheduled to be sentenced today. I say they are the last of the parents’ cases to be wrapped up because that’s what the press reports say and the DOJ website on the case shows no others. But that’s not true. What about Amin Khoury?

Khoury was indicted in September 2020 for allegedly paying a bribe to get his daughter into Georgetown as a tennis recruit. He was one of many in a similar position in the large-scale scandal. His name appeared regularly. As of last December he was mentioned in news reports as one of the last parents to still be fighting the charges. Then all mention of him disappeared. The DOJ website no longer lists him among the defendants. The only other parent who didn’t get convicted either through a plea deal or being found guilty at trial was a Miami businessman named Zangrillo who was pardoned by President Trump on his last day in office. Another bribe maybe? But Zangrillo stills appears on the DOJ site as having been charged and then pardoned. So why is Khoury no longer listed there? I’m certain he was earlier. This is still weird. If the charges were dropped, that should still be shown on the DOJ site.

I checked for Khoury’s Wikipedia page but only found mention of his father, Amin J. Khoury, reportedly a billionaire. It is the son Amin C. Khoury who was indicted. There’s no mention of the case on the father’s page.  He doesn’t have a Wikipedia page, but he does have his own blogspot page. I found this: 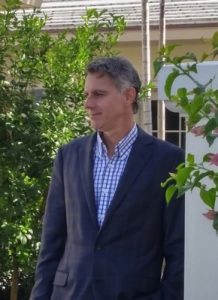 
He was suspended from Twitter and his blogspot posts have also been blocked for inappropriate content. The other pages don’t exist now.

I contacted the public information office of the U.S. Attorney in Boston but got no response. However, I was able to find on the court’s public docket that Khoury is scheduled to appear for a pretrial conference today in the courtroom of Judge Patti B. Saris. Obviously he’s still an active case and he’s still resisting the charges. Why is the press overlooking him? Why is DOJ so close-mouthed about his case? If he goes to trial, I suspect it will be an interesting case to follow. All the coaches have either pled guilty, agreed to do so, or been convicted. Of course the big fish, Rick Singer, the mastermind turned informant, has yet to face final sentencing.