There is so much in the news and pop culture about the political divide in America and the red vs. blue state dichotomy that I thought it would be nice to show how states can determine their color, and their fellow states’ colors, a different way. Every state has a state flower. Here’s how their colors are distributed. 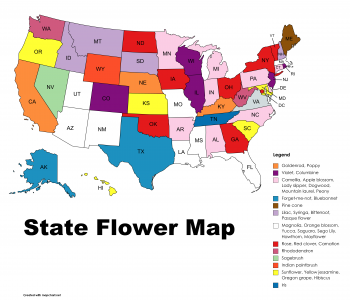 Of course many, perhaps all, flowers have varieties in different colors, so no single color represents all flowers of that species, but for each I chose a shade that I thought best represented that type. All the roses, for example, are red, even though there are different varieties for different states. I lumped together types that aren’t related, but have the same general color, such as the goldenrod and the golden poppy. When you look at the map, we don’t seem so divided along political lines anymore. Perhaps this will allow you to view the common values you share with states on “the other side.”