The map below shows you which dog breeds are popular in which states. But unlike other such maps it does NOT show the most popular breeds in each state. This is because in all but six states that would be Labrador Retrievers. Also, almost every state has German Shepherds as among the top three, usually in second position. So I have shown the most popular breed in each state other than Labs and German Shepherds. Beagles are especially popular in states with a lot of hunting. The data is taken from published  reports of the American Kennel Club (AKC) as of 2017, the most recent I found online. There are other sources with very different results based on other sources such as the American Veterinary Association, queries in dog breeder forums, and so on. Of course the vast majority of dogs are mixed breeds or “mutts.” 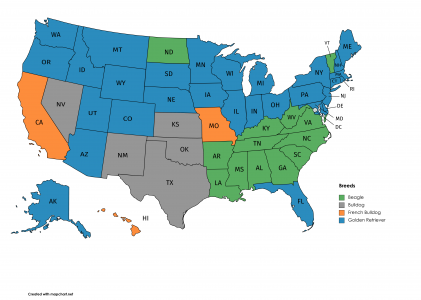 The legend font is a bit small so here is what it says: