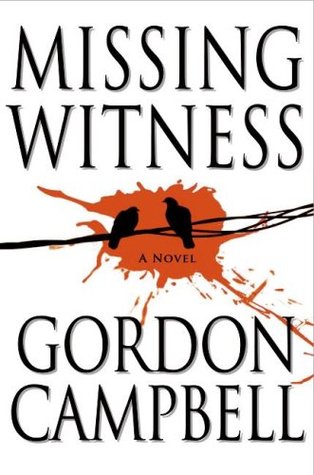 Missing Witness by Gordon Campbell
My rating: 5 of 5 stars

What a terrific legal thriller this is. The author is an attorney and writes convincingly of the legal process and strategies. Make no mistake – this is NOT a detective story. It’s all lawyers. If you’re after gunfights, car chases, and the like, don’t look here. But if you’re like me and enjoy the battle of wits in the courtroom (and outside sometimes, too) this is your sirloin steak.

The outcome of the trials is never really in doubt, but the road there is full of so many twists and turns your head will spin. The writing is learned and intelligent. Lawyers write so much better than writers, surprisingly, although usually they don’t tell stories that are as good. Here, the author does both well, but I will admit that I probably enjoyed it more than most people because I am, or at least used to be, a lawyer.

Despite my legal training I must say I’ve never bought the [insert epithet here] about truth and justice being found through the adversary system, or, for that matter, by a jury of one’s peers. My sympathies are entirely with those who ask criminal defense lawyers how they can look themselves in the mirror every morning. In a perfect world everyone in the justice system would be trying to bring out all facts and evidence relevant to a criminal trial, rather than hiding the ones that are harmful to their client. A lawyer with a guilty client should be helping society by working toward conviction and appropriate punishment rather than acquittal, but we all know that’s not how the system works. This is not a perfect world. It’s America. Lawyers, knowing what is in their own financial self-interest, work toward is in the best interest of their client, even if that means making him or her able to resume criminal activities sooner and with greater success. They’re like fences – associates who are part of the service industry making crime pay. Then they convince themselves it’s unethical to do anything else.

But I digress. The narrator in this case is an idealistic young trial lawyer sitting second chair in a spectacular murder trial, his first trial, under the tutelage of Dan Morgan, a legendary defense advocate. Morgan is one of those all-too-familiar antiheroes we see in novels – the hard-drinking, chain smoking, philandering play-by-his-own-set-of-rules kind of guy. Our neophyte gets some hard lessons in ethics, or the lack thereof.

I am curious about one thing, though: what in the heck does the cover art have to do with anything in the book? Nothing that I can see. Anyway, I don’t want to spoil anything, so I’ll leave it there. Have fun with this one.