I recently bought a new toy: a fitcamx dashcam for my Volvo XC40 P8. It has an advantage over other dashcams in that it connects to the power supply feeding the anti-glare mirror. It snaps into place just behind the mirror and looks like original equipment. Other brands feed a cable around the header lining and across the dash to plug into a USB port. Installation was a bear for me and took over 30 minutes, but others I know claim to have done it in less than 10 minutes. I have arthritis in my hands, so maybe you’ll have no trouble.

For this post I’d like to focus on what it’s good for once installed. The main purpose for dashcams is generally to provide proof in case of an accident.

The resolution on this video isn’t great, but that’s because WordPress won’t allow upload of the original file size (205MB). I had to upload the original to YouTube and then download it after it was processed there. YouTube limits the size. The downloaded version posted here is 16MB and is much lower resolution.

Native PC apps like Movies and TV and Movie Maker also won’t play the original file. I got an error message saying it was recorded using an unsupported codec. I followed the manufacturer’s recommendation and downloaded KMPlayer. It handles the original well with high resolution. Here’s a screen shot from their video, but WordPress has also reduced the resolution for this one. It’s sharper when viewed directly on my PC. 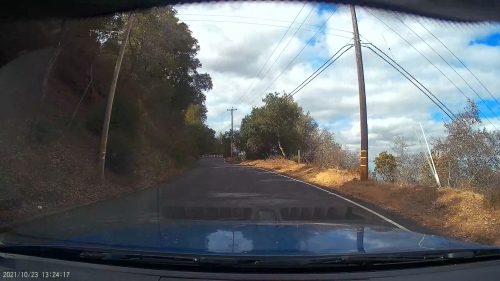 I’m sure there must be good video editing tools out there that can handle it, but Movie Maker only handles the low-res version. I found a free format conversion utility (Format Factory) that was able to accept the original and reduce the size and resolution enough so that the output file could be edited with Movie Maker. That file size was 40MB but other sizes could be chosen.

I’ve only had it for one day, so I have a learning curve ahead of me. When it runs out of space it overwrites the oldest files that haven’t been “locked”. The camera supposedly locks the video if there’s a sudden stop or impact so it won’t get overwritten. You can download to your phone using an app that comes with the camera. The app connects with the camera using wi-fi. I thought the camera ran continuously while the car was on in a loop, and saved every one-minute segment in a file. When I checked the camera “album” it appeared to me that there were gaps in the time sequence, so I’m not sure it is constantly recording, but perhaps I didn’t examine things carefully enough. I’ll post about it again if I learn more of interest or have misinformation here to correct.

The manufacturer in Hong Kong is very responsive. My first order got lost in transit. When I inquired of them, they immediately sent another one by express delivery. They’ve also replied to emails promptly.