I’m a member and past president of the American Cryptogram Association. I joined back in the 1970s. It’s my main hobby. The membership numbers have steadily declined since the digital age began. Here is a graphic representation of ACA member counts state by state in 2014 and 2022. The graphs are to scale with the numeric counts shown on the sides. 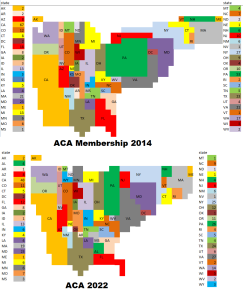 The distortion is caused by the fact membership is not proportional either to state population or geographic size. The outsized states of Virginia and Maryland are no doubt due to the influence of the intelligence community there. Perhaps the most noticeable decline is in Pennsylvania. That can probably be explained by the fact one member, LIONEL, made an effort back around 2014 or before to get seniors in nursing homes or senior residential facilities interested, which resulted in a disproportional representation there at that time. Age, health, or lack of interest must have taken its toll. There are some states missing from each graphic; those states had no members in the years indicated. E.g. South Dakota in both years, Wyoming in 2014, Kansas in 2022.